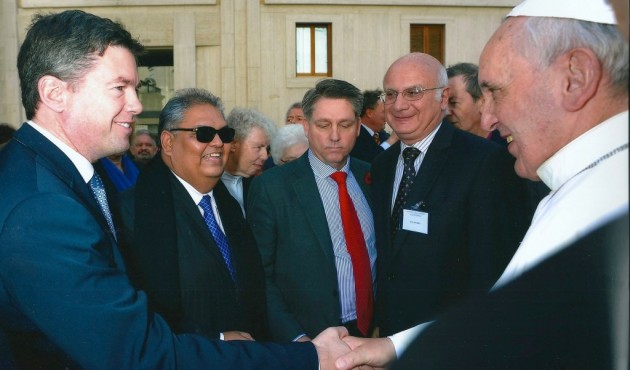 Three leading anti‐slavery activists and donors, Humanity United, the Legatum Foundation and Minderoo Foundation, announced the appointment of Nick Grono as CEO of the Freedom Fund, commencing today. Mr Grono will be based in London from January 2014.

Nick Grono previously served as CEO of the Walk Free Foundation, the international anti ‐ slavery organisation. During his tenure, the Walk Free Foundation built a global anti ‐ slavery movement with over 5 million supporters, launched the first ever Global Slavery Index, and joined with Humanity United and the Legatum Foundation to establish the Freedom Fund. Prior to Walk Free, Nick was Deputy President and COO of the Brussels ‐ based International Crisis Group.

“I’m honoured to be the inaugural CEO of the Freedom Fund,” said Nick Grono. “My objective is to leverage private donor funds to significantly increase the impact of new and existing anti ‐ slavery initiatives around the world.

“Our goal is to work with others to free a significant proportion of the estimated 30 million people in slavery today, and prevent millions of others from being enslaved.”

“We are excited that Nick Grono has accepted the position as CEO of the Freedom Fund. His record at the Walk Free Foundation and the International Crisis Group demonstrate clearly that he is focused on results,” said Randy Newcomb, CEO and President of Humanity United. “His experience, determination and drive make him the ideal person to lead the Freedom Fund.”

The Freedom Fund is an ambitious seven ‐ year effort to raise and deploy $100 million or more to combat modern ‐ day slavery. The Fund was announced by President Bill Clinton at the Clinton Global Initiative in September, who declared, “This is a huge deal and we should all support this.”

The Freedom Fund will support a variety of actors in the non ‐ profit sector, including international NGOs. There will be an emphasis on providing resources to grassroots organisations working on the front lines to free and rehabilitate survivors of trafficking.

The Fund will launch in the first quarter of 2014, and anticipates commencing its grant ‐ making from mid ‐ 2014.

Efforts to combat modern ‐ day slavery have traditionally been driven by individual actors and organisations with limited funding, relative to the scale of this significant problem. The goal of the Freedom Fund is to unite those working in isolation in order to create scalable, lasting change for the estimated 29.8 million people living under the oppression of modern slavery.

Humanity United, the Legatum Foundation and Minderoo Foundation have each committed $10 million to seed the Fund and will seek to extend the partnership to others who share the same passion and commitment to the cause. The partners’ initial funding will be used to establish the organisation and quickly begin directing resources to areas of need.