CLOSE
Home / Private: Newsroom / Press Releases / Private funding to fight modern slavery is a fraction of the profits generated by this crime 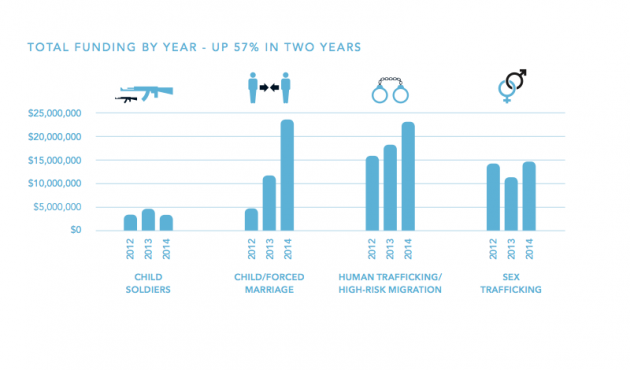 London, 1 April, 2016 : A new report released today reveals that between 2012 and 2014, $233 million in private funds were spent to combat slavery and forced labour – an amount dwarfed by the $150 billion dollars in profits that forced labour generates every year.

The report, “Funding the Fight Against Modern Slavery: Mapping Private Funds in the Anti-Slavery and Anti-Trafficking Sector: 2012-2014,” was prepared jointly by leading anti-slavery foundations, the Freedom Fund and Humanity United. It also found that funding to anti-slavery initiatives is growing—up 13% in 2013, and 57% in 2014, compared to 2012—and that new donors, large and small, are joining the movement.

Kate Kennedy, Managing Director, North America at the Freedom Fund, emphasised that more needs to be done if we want to tackle slavery effectively: “It is good news that private funding to fight slavery is growing, although that is from a low base. But there are between 20.9 and 35.8 million people subject to slavery and forced labour today, generating $150 billion dollars in illicit profits every year. Given the scale of the crime and the illicit profits derived from it, we need to mobilse significantly more funding from private funders and governments if we are to be able to tackle modern slavery and forced labour successfully.”

In addition to a need for increased funding, the report also found that better data is needed on the extent and cost—both human and economic—of slavery and of the effectiveness of interventions on the ground. According to Ed Marcum, Vice President, Investments at Humanity United, “As a sector, we need to do a better job of understanding the scope of the problem and the systems that enable it, including investing in research on which interventions work—and, just as importantly, which ones do not.”

Also recommended by this report is better collaboration between funders in the anti-trafficking and anti-slavery sector. Ms. Kennedy notes: “All of us who are working to end slavery must do a better job of working strategically to address this enormous problem. This report provides us with an opportunity to begin a conversation about how we might do that.”

About Humanity United
Established in 2005, Humanity United is a US-based foundation dedicated to building peace and advancing human freedom. At home and in the corners of the globe where these ideals are challenged most, we lead, support, and collaborate with a broad network of efforts, ideas, and organizations that share our vision of a world free of conflict and injustice. Humanity United is part of the Omidyar Group, which represents the philanthropic, personal, and professional interests of Pierre and Pam Omidyar.