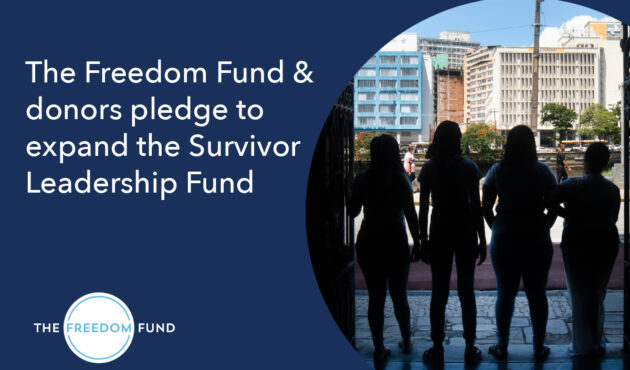 The Freedom Fund has pledged to expand its Survivor Leadership Fund – the first of its kind in the anti-slavery movement – to $10 million by 2030. The Fund will provide at least 300 survivor-led organisations around the world with unrestricted grants, allowing them to expand and grow their community-based interventions.

International human rights organisation Walk Free and USA-based Stardust Fund have each pledged $1 million for the initiative. The Freedom Fund has also pledged an initial $1 million, bringing combined seed funding to $3 million, with the goal of raising an additional $7 million by 2030. These commitments are especially important following the release of the new Global Estimates of Modern Slavery, which revealed that the number of people in modern slavery has increased globally by 10 million since 2017 to 49.6 million today.

These commitments were announced today by Secretary Hillary Rodham Clinton at the Clinton Global Initiative (CGI) 2022 Meeting in New York, where the Freedom Fund was first launched in 2013.

Secretary Clinton said: “Survivors uniquely support fellow survivors. And they shed light on the underlying systems of exploitation…Through this commitment, the Freedom Fund is sending a bold message about the urgency of ending modern slavery and about the importance of trust-based philanthropy…And [to] make clear that survivor-led organisations are worthy of our investment and our trust.”

The Survivor Leadership Fund supports the leadership of individuals who have experienced modern slavery, including human trafficking, forced labour, child labour and forced marriage, providing survivor-led organisations with unrestricted grants of up to $20,000 to support their work in the way they see fit.

The Freedom Fund’s Managing Director of Strategic Partnerships, Amy Rahe said: “We know the most effective interventions to combat modern slavery and human trafficking center the leadership, expertise and perspectives of individuals with lived experience.

“But despite their importance to our movement, survivor-led organisations frequently struggle to access necessary funding due to discrimination, rigid requirements and lack of access to donors.

“We take our commitment to supporting the leadership of survivors seriously, and are incredibly thankful to our partners, Walk Free and Stardust Fund. The Survivor Leadership Fund will provide a much-needed pillar of support and injection of funds not previously available to survivor-led, community-based groups. It will also help mitigate the inherent power imbalance in the donor-grantee relationship.

Grace Forrest, Walk Free’s Founding Director and a Freedom Fund Board Director, said: “We are honoured to be able to support the Survivor Leadership Fund. Too often, the expertise of survivors is not taken into consideration and they are not given the platforms they deserve. But survivor voices are essential to tackling this global issue, which affects an estimated 50 million individuals today.

“We believe that by providing these groups with unrestricted funding, they can find the space they need to build their organisations and make their essential mark on the fight against modern slavery.”

Molly Gochman, Founder of the Stardust Fund and a Freedom Fund Board Director, said: “I am thrilled to back the Survivor Leadership Fund, supporting the shift of power back to survivors and affected communities. We know that true transformation of oppressive and exploitative systems only takes root if we empower those most affected.

“As donors, we have an incredible opportunity to fund ideas that can uplift entire communities. This is a clear and tangible way we can make a real difference to the anti-slavery movement. I invite others to join us in funding a more equitable and just future.”

Walk Free is an international human rights group focused on the eradication of modern slavery in all its forms. We are the creator of the Global Slavery Index, the world’s most comprehensive data set on modern slavery. We use this evidence to hold power to account, to push for laws that tackle modern slavery, to agitate for change, and to dismantle the systems that create, and profit from, modern slavery. Walk Free believes that survivors are central to end modern slavery and to lead the movement. Through a combination of direct implementation, grassroots community engagement, and working in partnership with survivors, faiths, businesses, academics, NGOs and governments around the world, we work to address modern slavery and dismantle its core drivers.

The Stardust Fund is dedicated to removing barriers and building women and girls’ collective power to advance equity and justice for all by supporting and strengthening the capacity of women-led organisation and movements to advance meaningful social, cultural and economic change.

The Clinton Global Initiative (CGI) convenes global and emerging leaders to create and implement solutions to the world’s most pressing challenges. CGI works with partners to drive action through its unique model. Rather than directly implementing projects, CGI facilitates action by helping members connect, collaborate, and develop Commitments to Action — new, specific, and measurable plans that address global challenges. Through CGI, the community has made more than 3,700 Commitments to Action that have made a difference in the lives of more than 435 million people in more than 180 countries.