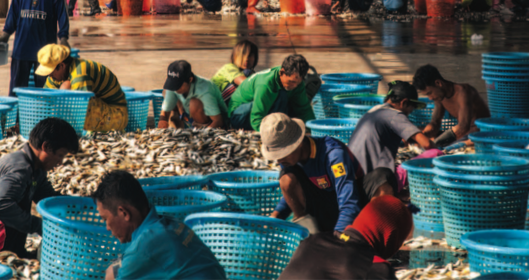 London: Scrutiny on the Thai seafood industry has revealed widespread labour exploitation in recent years, and while new reforms have been enacted, persistent gaps in regulation and enforcement are allowing the abuses to continue.

A new report from the Freedom Fund and Humanity United has found that amidst wide-ranging initiatives launched by both the Thai government and private sector, there remains a significant failure to fully protect workers from exploitation and abuse, particularly with the government’s system of inspections.

The report, Assessing Government and Business Responses to the Thai Seafood Crisis, concludes that while the recent, rapid introduction of initiatives is welcome and encouraging, it is vital that reform efforts are realistic, properly funded and monitored, and embedded for the long term in industry practice.

According to the report, given the scale of modern slavery in the Thai fishing industry and the ongoing gaps in regulation and traceability, both government and business should refrain from issuing premature claims that Thailand’s forced labour problem has been solved.

Nick Grono, CEO of the Freedom Fund says: “The presence of slavery in our seafood is abhorrent and unacceptable. While I am encouraged by the historic reforms taking place in the Thai seafood industry, we cannot act as if this issue has been systemically and satisfactorily addressed.”

“Forced labour in Thailand’s fishing industry is a well documented and complex problem,” said Ed Marcum, Managing Director at Humanity United. “This report confirms that we have a long way to go to fully address it.”

The report evaluates recent changes by the Thai government and private sector that have sought to tackle a deeply entrenched system of impunity for illegal fishing and exploitation at sea, and a poorly managed labour market filled by vulnerable migrant workers. The report acknowledges that to address these challenges, the Thai government and members of the industry have introduced sweeping reforms  that, on paper, are some of the most comprehensive measures the industry has ever seen. But government implementation has been inconsistent, both in ports and at sea, and the private sector still must ensure its new processes are comprehensively adopted and involve the voices of workers and NGOs.

About Humanity United
Humanity United is a foundation dedicated to bringing new approaches to global problems that have long been considered intractable. We build, lead, and support efforts to change the systems that contribute to problems like human trafficking, mass atrocities, and violent conflict. HU is part of the Omidyar Group, which represents the philanthropic, personal, and professional interests of the Omidyar family.