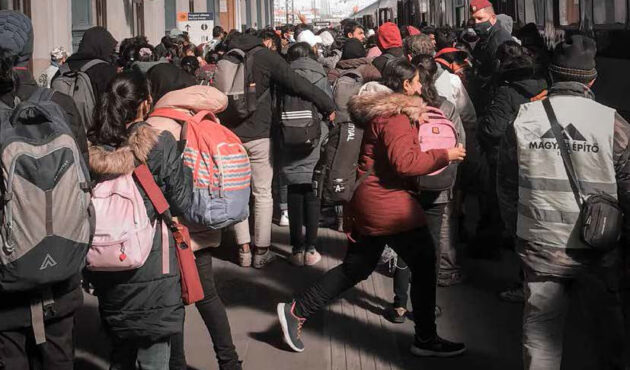 Urgent action from Governments and donors is needed to counter a predicted rise in human trafficking as the huge population displacement caused by the war in Ukraine continues, a new report launched today has warned.

People fleeing the war, mainly women and children, are extremely vulnerable and face increased risk of sexual and labour exploitation as organised criminal groups and individual profiteers take advantage of the turmoil.

Evidence of human trafficking activity has already been identified with law enforcement bodies reporting suspicious behaviour, hotlines receiving up to five times as many calls for advice, and anti-trafficking organisations starting to receive requests to assist people who may have been trafficked.

The warnings come from La Strada International, a European anti-trafficking NGO platform, which has carried out a rapid assessment to determine what is required by governments, organisations and donors for a comprehensive counter-trafficking response.

The report, commissioned by the Freedom Fund, also identifies the risks faced by people displaced within Ukraine and refugees from the country into Eastern and Central Europe, which has seen the biggest movement of people since the Second World War.

The research, carried out in March and April, concludes the risks of trafficking and exploitation are likely to increase as the war continues, with more people becoming displaced within Ukraine making access to services and livelihoods more precarious, while millions of refugees will need to settle for longer periods in other European countries and start accessing the labour market.

Currently, many refugees are using social media to gain assistance, revealing information about their location and situation but traffickers and abusers are already using these platforms to target potential victims to work in the sex industry and other vulnerable job sectors in Europe, where labour shortages are high and working conditions are often poor for foreigners.

The report identifies several groups that are particularly vulnerable, including unaccompanied children, stateless and undocumented people and those that might not have access to the temporary protection offered in EU countries. Trafficking tactics include being approached by strangers at the border, in shelters or online with false promises of accommodation and work, or requesting sexual or other services in lieu of rent.

A lack of oversight on who offers assistance, vetting of volunteers, and insufficient checks on housing offered has also exposed refugees to trafficking risks, it says.

While governments, international organisations, civil society, and community leaders have taken steps to protect people from trafficking, the report says gaps remain, due to limited capacity to deliver.

The report makes a series of recommendations to national governments, international organisations and donors to invest in and promote:

Specifically, the report calls for donors to:

Dan Vexler, managing director of programs at the Freedom Fund, says: “Conflict and disasters worldwide have long been connected with human trafficking. Profiteers – including organised criminal groups and individuals – take advantage of the turmoil and despair that follows as people become increasingly vulnerable. We have seen this following the 2015 earthquake in Nepal, in Syria and amongst the Rohingya people from Myanmar. Inevitably we are now seeing this happening in Europe as a result of war in Ukraine.

“So far five million people have fled Ukraine and another seven million people are displaced in the country. We need to prevent the trafficking of these vulnerable people, many of whom have lost everything and may be desperate.”

Report co-author Suzanne Hoff, Coordinator at La Strada International, says: “While authorities and national governments are taking action and attention has been paid to the risks of human trafficking, our report shows significant gaps which we believe should be swiftly addressed to prevent people becoming prey to traffickers. Those who have fled alone, with no relatives or contacts in neighbouring countries, face a significantly increased risk as they need to rely on people they do not know. Urgent action is needed to counter this.

“Civil society organisations, including our members across Europe, are working with very pressing needs which are expected to rise. Long-term flexible support is needed from donors to enable frontline responders to maintain anti-trafficking operations now and in the future when attention on the war reduces, as the after-effects will persist for years.”

For interviews with the report authors, please contact Nicola Peckett, head of communications at Freedom Fund at [email protected].

La Strada International is a European NGO platform against human trafficking that works from a human rights perspective in support of trafficked persons. It has 30 members, all working at grass roots level in 24 European countries, and partners with governments, civil society actors and major international bodies including the Council of Europe, OSCE, IOM, UNHCR and other UN bodies.

The Freedom Fund identifies and invests in the most effective frontline efforts to eradicate modern slavery in the countries and sectors where it is most prevalent. Partnering with visionary investors, governments, anti-slavery organisations and those at risk of exploitation, we tackle the systems that allow slavery to persist and thrive.