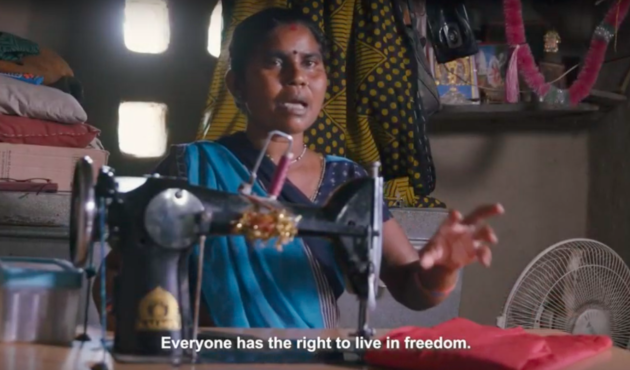 Tara is one of the hundreds of former bonded labourers who work to free families and communities in northern India. Bonded, the short film below, follows her efforts to free a village trapped in bonded labour at a brick kiln.

Born to a poor family in a village in northern India, Tara faced caste discrimination her entire life. It was at the age of nine when her father died that Tara began working at a brick kiln; a place where her entire family and most of the village were in bondage.

The working conditions were appalling. The entire family was forced to work by the employer under threats of violence and forbidden to leave. The workers were brutally beaten up with one suffering fatal wounds. Tara couldn’t attend school and did not have the freedom to travel anywhere. Fearful of their lives, the workers at the kiln were too scared to speak up.

It was with the efforts of Manav Sansadhan Evam Mahila Vikas Sansthan (MSEMVS), a local organisation supported by the Freedom Fund that Tara and the other workers were freed. Now an adult mother of two running her own small tailoring business, Tara has emerged as a leader, having helped liberate more than 60 bonded labourers. Now as a member of the survivors’ collective Azad Shakti Abhiyaan (Strong Campaign for Freedom), she travels from village to village to encourage solidarity and action among groups subjected to caste-based exploitation.

Before the covid-19 pandemic, the rates of bonded labour were falling in parts of northern India because marginalised communities mobilised for their rights. Former bonded labourers like Tara uprooted discrimination by empowering survivors and supporting the ones still trapped. They sent their children to school and advocated for their rights collectively. They joined other survivors across India to raise their concerns with policymakers and change the discourse.

As Tara herself says: “The fear has gone from my body and soul. I have courage and confidence now. The biggest freedom I’ve got is the strength to speak out about our issues. Everyone has the right to live in freedom, and everyone must fight for their rights to be free.”