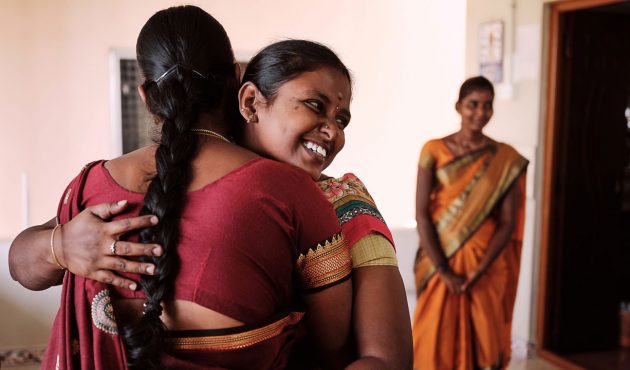 “All human beings are born free and equal in dignity and rights.” These are the opening words of the Universal Declaration of Human Rights, adopted by the United Nations on this day in 1948 – an anniversary marked by today’s Human Rights Day.

But sadly, they do not ring true for the tens of millions of people still enslaved around the world. Certainly not for Than Than (name changed), a 54-year-old woman I met in Myanmar a few years ago. Than Than lives in Northern Shan, a state bordering China. When I met her, she had three children, including her daughter Aye (name changed) who left for China at age 15. Than Than had not seen Aye in six years.

Than Than told me that when her cousin arranged a job for Aye in China, it seemed like a good opportunity. Several weeks later, Aye phoned her mother to say that she had been sold into a forced marriage with a Chinese man and was expected to bear children. Aye later escaped, but the broker, angered over his lost investment, demanded Than Than stand in as a replacement. She was sent to China, accompanied by her young son. Than Than was abused and malnourished for three months and her health quickly deteriorated. She was separated from her son who was held captive in a room.

Eventually, a local civil society organisation in Shan state worked with authorities to free Than Than and arrest her broker. Home in her village, Than Than now suffers from serious reproductive health issues. She receives support from the local organisation, which helps her with her medical care and keeping her son in school. Aye is still missing.

As CEO of the Freedom Fund, I am frequently reminded that for people like Than Than and Aye, a lifetime of freedom is not a given. Our mission is to eradicate modern slavery, a violation of human rights that affects 40 million of some of the world’s most vulnerable people. Through this work, I have learned that our strongest allies in eradicating slavery are frontline partners, like those in Myanmar working to prevent others from being subjected to the trauma that Than Than and Aye experienced.

Frontline organisations know that to combat exploitation, you can not only focus on liberating and supporting survivors. You must also focus on addressing root causes of vulnerability by building community-level resistance, creating economic alternatives, shifting incentives for businesses, and ensuring traffickers do not operate with impunity. These organisations know the local context and have earned the trust of the communities where they work. They uniquely equipped to tackle the drivers of modern slavery head-on. In Myanmar, for example, they understand the unique protection needs of women and girls within a human rights framework, and how those needs must inform anti-trafficking efforts.

At the Freedom Fund we have developed a model to efficiently direct philanthropic dollars to these frontline organisations, alongside technical assistance and support for organisational development. In addition to scaling support services like those offered to Than Than, these groups are building their collective voice to call for systems-level reforms. Evidence from our work shows that effective support of frontline partners can super-size direct impact and have a transformative effect on entire communities. And when a pooled fund like ours is involved, we can reduce the burdens of bureaucratic processes and cumbersome reporting that often prevents local groups from accessing funding in the first place.

While the conversation about supporting grassroots groups is by no means new to human rights, it has often stopped at just that— lip service without real action. In order to actually tilt the scales towards a more equal distribution of power, donors need to implement funding models and policies that increase the ability of frontline groups to access dependable funding and prioritise sustainability and movement building, not just direct services. I am cautiously hopeful hearing leaders like Samantha Power, USAID’s new Administrator, publicly commit to direct funding to local partners. I hope that as they interrogate the power dynamics of donor-driven development, USAID and other donors will make concrete changes to their funding models to ensure that frontline groups can access resources without having to distract from doing what they do so well—protecting the human rights of marginalised communities and holding institutions to account.

Today I celebrate the courageous survivors like Than Than and the human rights defenders who are not waiting for donors to catch up. They are on the frontlines, as they always have been, working to give full meaning to the Universal Declaration of Human Rights.