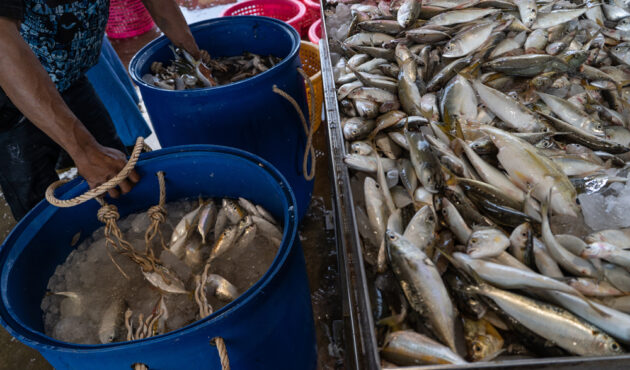 Global estimates of people living in modern slavery in 2021

The International Labour Organization, Walk Free and the International Organization for Migration, share the latest estimates of people living in modern slavery around the globe. On any given day in 2021, 50 million people were forced to work or marry against their will, marking an astonishing 25 percent increase compared to the 2017 estimates. The covid-19 pandemic, armed conflicts and climate change crisis have immensely contributed to the worsening situation, alongside improvements in their data collection mechanism.

A report by Greenpeace assesses the reliability of the information available on Bumble Bee’s “Trace My Catch” website, allegedly designed to enable consumers to track the source of their canned tuna products. Using data from this website and interviews with nine migrant fishers on six Taiwanese supplier vessels, the study found that out of the 290 vessels supplying tuna to the company, information provided for 28 of the fishing areas was incorrect, and 13 of the vessels were listed under the Taiwan Fisheries Agency’s website for illegal, unreported and unregulated fishing.

The impact of school feeding programs on child labour

The UN High Commissioner for Human Rights released a final assessment of the allegations of human rights abuses committed against members of the Uyghur and other predominantly Muslim ethnic minorities in XUAR. Based on a credibility assessment of publicly available information, satellite imagery, and 40 interviews with individuals with direct knowledge of the situation, it concluded that acts of arbitrary and discriminatory detention taking place in XUAR may constitute crimes against humanity. The report includes a series of recommendations directed at the Government of China, businesses and the international community.

Global Witness examines the impact of heavy rare earth mining operations in Myanmar, which is currently the world’s largest source of supply. Through satellite images, the team uncovered almost 300 mining locations in the Kachin region alone, employing roughly 20,000 workers. Based on 94 survey responses, plus 121 interviews with rare earth miners, experts, government actors and other relevant stakeholders, it was found that these operations are linked to severe human rights abuses and have devastating effects on local ecosystems, livelihoods and access to clean water.

The Freedom Fund is making small grants to promote survivor inclusion in global convenings, as a part of our commitment to survivor leadership in the anti-slavery movement. Apply here.